A 200 kW (75 cells, 415 cm2) PEM electrolyser based on new type of MEAs and an advanced stack design was demonstrated at Emden (Germany) for power-to-gas applications. The activities includedthe production of electrolytic hydrogen from an electricity grid sharing a large fraction of renewable energy (from wind mills) and the injection of the produced hydrogen into the local gas grid. The field testing activity required a previous site analysis. The gas takeover station of SWE at Pfälzer-Straße in Emden (Germany) was considered as an appropriate location for the demonstration plant. Specific approval for the hydrogen gas injection directly into the natural gas grid was granted by the Technischer Überwachungsverein (Technical Inspection Association) authorities.

After completing the site-building phase in Emden and electrolyser factory acceptance testing (FAT) at ITM (UK), the electrolysis plant was assessed during the field testing activity and generated hydrogen was fed into the gas feed station. The hydrogen pressure was reduced from 20 bar to 10 bar, as SWE’s gas network operates at 8.5 bar. The hydrogen was fedinto a mixer to mix the feeding volume with the natural gas. SWE’s electricity grid, usually sharing a large fraction of renewable energy, was used for the required electrical supply and a transformer ensured low voltage for the electrolyzer operation.

The field testing activity was carried out with the aim of evaluating the power-to-gas process as a means to store the surplus of renewable energy and to provide grid balancing service. The proof-of-concept of power-to-gas was demonstrated for the new electrolysis system and significant knowledge was acquired about the operation of this type of advanced electrolyser at high current density.

The operational period of the electrolyser was affected by the occurrence of a failure at the electrolyser plant essentially due to a mechanical damage of an MEA inside the stack, which was clearly identified by specific diagnostics of the 75-cell stack. Another issue that occurred during operation was contamination of the active components of the stack (MEAs). This was thought to have resulted from a temporary malfunctioning of the ion exchange resin cartridge of the water purification system. The system was subjected to the detailed analysis and specific solutions have been identified. Several communication activities were undertaken for the field testing site.

The full report can be read here. 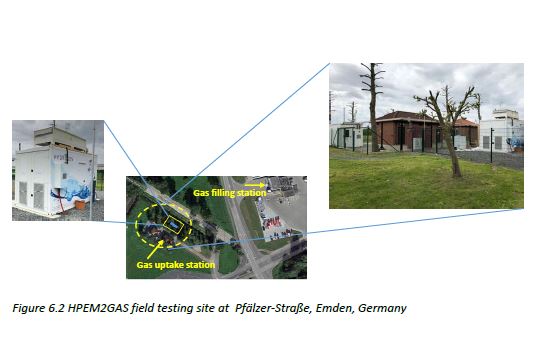