The city of Emden, a prosperous industrial and port city in the north-west of Germany, has faced the challenge of climate protection and energy saving efforts for more than 25 years. Numerous climate protection measures in recent years have contributed to a significant reduction in the emission of CO2 in urban areas. Examples which may be mentioned are:

Emden has received numerous awards for his commitment to climate protection. The city was the first to participate in the European Energy Award (EEA) in Niedersachsen. In 2004 the city was awarded the Silver and in 2012 and 2015 even the Golden EEA. The EEA is a quality management system and certification procedure for municipal energy efficiency and climate protection, which measures and compares the efforts and the successes of a municipality from an independent point of view. In 2005, the city also won the German Solar Prize.

In 2010, the City of Emden was honored as part of the Municipal Climate Protection Competition of the State of Niedersachsen for its “Energy Efficiency” master plan. The city of Emden was again one of the winners in the competition “Climate on a Municipal Level”. The prize was awarded for the campaign “CO2 Footprint”, a lighthouse project for the long-term behavioral and awareness changes of the population in the field energy, developed by the city together with Ökowerk Emden as well as the cities of Emden.

Lately the city of Emden received the award as “climate-active municipality 2016” for the climate-friendly orientation of the feasting festival “Emden à la carte” in Berlin, on 28.11.2016. Prize was received in Berlin from Federal Minister for Environmental Protection Dr. Barbara Hendricks. The “Emden à la carte”-event organized by the restaurant owners from Emden was organized for the first time in 2015 on the initiative of the city of Emden under the slogan “regional cuisine – delicious and climate friendly”.

However, the city of Emden must also make further efforts to achieve the ambitious climate protection targets of the municipal climate protection concept or the Climate Alliance: a 50% CO2 reduction by 2030. In addition to energy-saving technology and the generation of energy from renewable sources. Above all one thing: a rethinking. The conscious handling of energy and the consequent energy and CO2 savings must, of course, lead to actions and change in attitude of all citizens.

For example, e.g. action items in the area of transportation and public information are directed to behavioral changes of the citizens. As the experience shows, positive results for climate protection can be achieved. For many years, Emden has been implementing various mobility campaigns to promote the environmental transport network (bus, cycle and pedestrians). The objective is an intermodal and flexible form of mobility, which provides residents with a range of sustainable means of transport, thus significantly reducing emissions in the transport sector. The area “Sustainable mobility / environmental transport network /” Emders up Rad “was therefore identified as a priority measure in the climate protection concept of the city of Emden and is essentially divided into the fields of cycling and urban transport planning.

The successful “Emders up Rad” campaign was launched in 2004. By consistently expanding and qualifying the cycling infrastructure, especially by means of this campaign, which aims to change the behavior of the citizens, the proportion of bicycle traffic in the city could be increased to more than 30%.

This is one example among many in Emden, which shows how Emden develops and strengthens its climate protection to reach a 50% CO2 reduction by 2030.

Emden goes even further. On the basis of a resolution dated July 9, 2015, the City Council of Emden decided that the city would apply 100% climate protection to the Federal Ministry of the Environment for inclusion in the Masterplan program. On March 17, 2016, the city of Emden received a pledge that the city would be included in the Masterplan 100% Climate Protection project, funded by the Federal Ministry of the Environment. The Master Plan program is in line with the Federal Government’s goal of reducing greenhouse gas emissions by 80 to 95% by 2050. This is only achievable if the municipalities are also orientated towards these goals in the next 35 years and reduce their greenhouse gas emissions to zero. With his commitment as a masterplan municipality, Emden would like to take this into account. 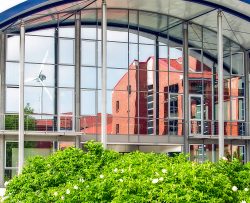 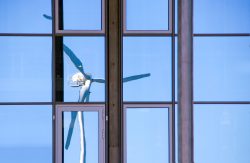