The large-scale deployment of wind power and solar energy sources will strongly contribute to the implementation of Europe’s energy policies objectives i.e. to produce 65% of electricity from renewable energy sources by 2050 and to reduce CO2 emissions linked to energy production by 50%.1

However, wind power and solar energy resources are characterised by intermittent behaviour and their fluctuations affect the stability and reliability of the electrical grid.  Consequently, there is a strong need for rapid-response, cost-effective and scalable energy storage systems capable of absorbing the electrical power exceeding the capacity of a transport and distribution line.

Hydrogen produced from water electrolysis can play a significant role as an energy storage medium.1,2  Electrolysis can support the electricity grid in terms of power quality, frequency and voltage control, peak shaving, load shifting and demand response.  However, current electrolysers, especially those based on alkaline systems, are characterised by poor dynamic behaviour.

Future electrolysers need to be highly efficient across a wide load curve, capable of handling frequent start-stops and be able to follow the variable energy generation profiles of locally available renewable power sources, to provide superior grid-balancing services, to address the steep increase of intermittent renewables interfacing with the grid.

In working towards this goal ITM Power have been conducting tests in the laboratory on their commercial Proton Exchange Membrane (PEM) water electrolyser stack at significantly higher current densities than their nominal operating point of 1 – 1.5 A.cm-2 (Figure 1). 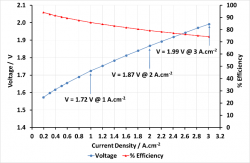 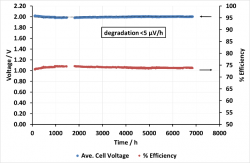 In another test, a stack operating at 3 A.cm-2, generating hydrogen at a pressure of 20 bar and intermittently operated at up to 4.5 A.cm-2, showed a similarly low level of degradation (Figure 3). 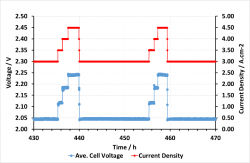 As the electrolyser’s hydrogen production rate is directly related to the operating current density, according to Faraday’s law, a three-fold increase in current density from the present 1 – 1.5 A.cm-2 to 3 – 4.5 A.cm-2, with a modest efficiency penalty, will proportionally reduce stack costs by a factor of three, helping to reduce the capital cost of the overall system.

This work is taking place as part of the FCH-JU funded HPEM2GAS project, which has the ambition of realising breakthroughs in PEM water electrolysis technology for cost-effective grid balancing applications.    The aim of the project is to develop a 180 kW highly efficient, flexible and durable water electrolysis system, which will then be shipped to Emden and interfaced with the city’s electricity and gas grid for a 6-month field test.  R&D in innovative hydrogen production from grid-service and renewable energy sources (Power to Gas) is one of the priorities of the FCH-JU Multi Annual Work Plan as it can bring about a zero carbon hydrogen economy.