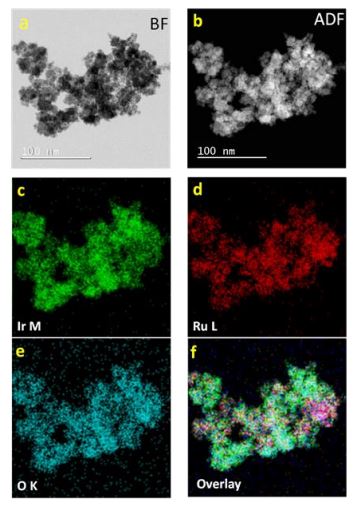 The excellent performance and dynamic behaviour for storing electrical energy in hydrogen allow polymer electrolyte membrane (PEM) electrolysis to cover the gap between the intermittent renewable power production and the grid demand at different time horizons and scales. This deliverable is mainly addressed to the development and characterization of high performance nanostructured Ir-Ru-oxide electro-catalyst achieving for the rate determining oxygen evolution reaction a current density of 3 A cm-2 at about 1.8 V (>80% enthalpy efficiency) with a low catalyst loading (0.34 mg cm-2 ). The stability characteristics were studied in practical PEM electrolysis cells operating at 80 °C, using several durability tests of 1000 h each to evaluate the reliability of this electrocatalyst for real-life operation.

Further insights on the degradation mechanism were acquired by subjecting the catalyst to potential steps in a specially designed electrochemical flow cell under corrosive liquid electrolyte with on-line monitoring of the dissolved ions. Structural, morphology, composition and surface analysis of the anode electro-catalyst after operation in the electrolysis cell, complemented by in-situ electrochemical diagnostics, provided important insights into the degradation mechanisms. Catalyst operation at high turnover frequency was observed to cause a progressive change of Lewis acidity characteristics with time for both Ir and Ru cations thus influencing their ability to promote water oxidation. Nanosized Ir-black (3 nm) and Ir-oxide (5 nm) oxygen evolution electrocatalysts showing high performance in polymer electrolyte membrane (PEM) water electrolysis based on Aquivion® shortside chain ionomer membrane were, also, investigated to understand the role of the Ir oxidation state on the electrocatalytic activity and stability.

Despite the smaller mean crystallite size, the Ir-black electrocatalyst shows significantly lower initial performance than the Ir-oxide. During operation at high current density, the Ir-black shows a decrease of cell potential with time whereas the Ir-oxide catalyst shows increasing cell potential resulting in a degradation rate of about 10 µV/h, approaching 1000 h. The unusual behaviour of the Ir-black results from the oxidation of metallic Ir to IrOx . The Iroxide catalyst shows instead a hydrated structure on the surface and a negative shift of about 0.5 eV for the Ir 4f binding energy after 1000 h electrolysis operation. This corresponds to the formation of a sub-stoichiometric Ir-oxide on the surface. These results indicate that a hydrated IrO2 with high oxidation state on the surface is favourable in decreasing the oxygen evolution overpotential. Modifications of the Ir chemical oxidation state during operation can affect significantly the catalytic activity and durability of the electrolysis system.

The full report can be read here