Report on MEA development and characterisation 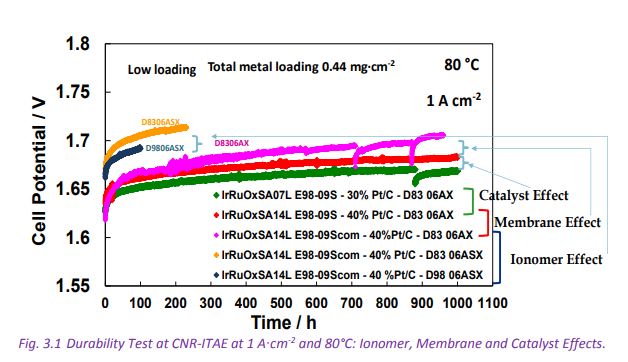 The excellent performance and dynamic behaviour for storing electrical energy in hydrogen allow proton exchangeable membrane (PEM) electrolysis to cover the gap between the intermittent
renewable power production and the grid demand at different time horizons and scales. However, one of the main hindrance for more wide spread utilisation of PEM-electrolysis is the cost to a certain extend related to the use of noble metals. Lowering the amount of noble metals may jeopardise other features. The presented work concerns the development and characterization of PEMelectrolysis MEAs (membrane electrode assembly) with (ultra) low PGM loading, high performance and low degradation.

The specific project targets defined for the MEA development are as follows: Reduce the cathode PGM loadings with a factor of >5 down to <0.1 mg/cm2

The work was initiated with a screening analysis carried out at the CNR-ITAE of different MEAs based on various precursors and combinations. The MEAs were judged based on polarisation and EIS; longterm test was performed on selected MEAs with encouraging performance. The project performance targets, with respect to catalyst loading and performance, were obtained for MEAs based on the Solvay membrane Aquivion® E98-09S, stabilised Solvay ionomer (D98-06ASX), and optimised catalysts developed by CNR-ITAE (cathode 40% Pt on C and anode: Ir0.7Ru0.3OX). Information derived from the screening analysis was transferred to EWII in order to scale-up the selected formulations for large scale CCM coating. The activity was thus expanded to cover the ink formulation and processing for the novel ionomers and catalysts. Small, medium and full HPEM2Gas sized MEAs (<10, 130 and 415 cm2 active area, respectively) have been manufactured by EWII. The results obtained for the small and the intermediate sized MEAs at ITM are well in line with the results reported by CNR-ITAE.

Long-term test have illustrated that the decay rate declines with time. The lowest performance decay recorded for an optimised HPEM2Gas MEA is 8 µV/h @ 3 A/cm2 after 4,000 h operation, close to the project target. Current and thermal cycling of single cells proved to have limited impact on degradation. Pronounced reversible degradation has been observed at low temperature (55ºC) and too a much lower degree at high temperature (80ºC).

The full report can be read here.